The Birth of Tragedy from the Spirit of Music (German: Die Geburt der Tragödie aus dem Geiste der Musik) is an 1872 work of dramatic theory by the German philosopher Friedrich Nietzsche. It was reissued in 1886 as The Birth of Tragedy, Or: Hellenism and Pessimism (German: Die Geburt der Tragödie, Oder: Griechentum und Pessimismus). The later edition contained a prefatory essay, “An Attempt at Self-Criticism”, wherein Nietzsche commented on this earliest book. (Wikipedia)

Text from this book:

7…The profound Hellene, who is uniquely equipped for the most delicate and intense suffering, who has directed his acute gaze down into the middle of that fearful swirling compulsive process of annihilation which goes by the name of world history as well as into the cruelty of nature, and is in danger of longing for a Buddhist negation of the will, finds consolation in this chorus. Rescued by art, he is rescued, for its own purposes, by—life.

The ecstasy of the Dionysian state, with its annihilation of the usual limits and borders of existence, contains for its duration a lethargic element in which all past personal experience is submerged. And so this chasm of oblivion separates the world of everyday reality from that of Dionysian reality. However, as soon as that everyday reality returns to consciousness, it is experienced for what it is with disgust: an ascetic mood which negates the will is the fruit of those conditions. In this sense the Dionysian man is similar to Hamlet: both have at one time cast a true glance into the essence of things, they have acquired knowledge, and action is repugnant to them; for their action can change nothing in the eternal essence of things, they feel that it is laughable or shameful that they are expected to repair a world which is out of joint. Knowledge kills action, to action belongs the veil of illusion—that is the lesson of Hamlet, not that cheap wisdom of Hans the Dreamer, who fails to act because he reflects too much, as a result as it were of an excess of possibilities; not reflection, no!—but true knowledge, insight into the horrific truth, outweighs any motive leading to action, in Hamlet as well as in the Dionysian man. Now no consolation is accepted, the longing goes beyond the world after death, goes beyond even the gods, now existence, together with its glittering reflection in the gods or in an immortal other world, is negated. Conscious of the truth once glimpsed, man now sees all around him only the horrific or the absurd aspects of existence, now he understands the symbolic aspect of Ophelia’s fate,* now he recognizes the wisdom of the forest god Silenus: it disgusts him. 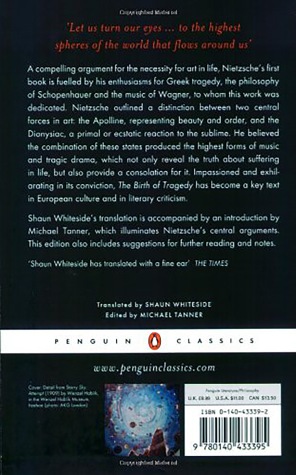 A compelling argument for the necessity for art in life, Nietzsche’s first book is fuelled by his enthusiasms for Greek tragedy, for the philosophy of Schopenhauer and for the music of Wagner, to whom this work was dedicated. Nietzsche outlined a distinction between its two central forces: the Apolline, representing beauty and order, and the Dionysiac, a primal or ecstatic reaction to the sublime. He believed the combination of these states produced the highest forms of music and tragic drama, which not only reveal the truth about suffering in life, but also provide a consolation for it. Impassioned and exhilarating in its conviction, The Birth of Tragedy has become a key text in European culture and in literary criticism.

“The Birth of Tragedy” argues the importance of the tension between what Nietzsche called Apollonian and Dionysian forces. These contrasting forces enable a work of art to reveal the truth about human existence in such a way that we are able to bear the weight of its tragic wisdom. Nietzsche boldly combines aesthetics and psychology in a creative meditation on the sources of artistic inspiration. He also addresses the problem of nihilism in modern culture. “The Birth of Tragedy” offers an excellent point of entry into Nietzsche’s corpus. 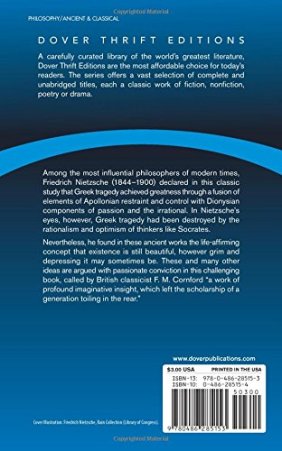 Among the most influential philosophers of modern times, Friedrich Nietzsche (1844-1900) declared in this classic study that Greek tragedy achieved greatness through a fusion of elements of Apollonian restraint and control with Dionysian components of passion and the irrational. In Nietzsche’s eyes, however, Greek tragedy had been destroyed by the rationalism and optimism of thinkers like Socrates. Nevertheless, he found in these ancient works the life-affirming concept that existence is still beautiful, however grim and depressing it may sometimes be. These and many other ideas are argued with passionate conviction in this challenging book, called by British classicist F. M. Cornford “a work of profound imaginative insight, which left the scholarship of a generation toiling in the rear.”

Nietzsche found in classical Athenian tragedy an art form that transcended the pessimism and nihilism of a fundamentally meaningless world. The Greek spectators, by looking into the abyss of human suffering and affirming it, passionately and joyously affirmed the meaning of their own existence. They knew themselves to be infinitely more than petty individuals, finding self-affirmation not in another life, not in a world to come, but in the terror and ecstasy alike celebrated in the performance of tragedies.